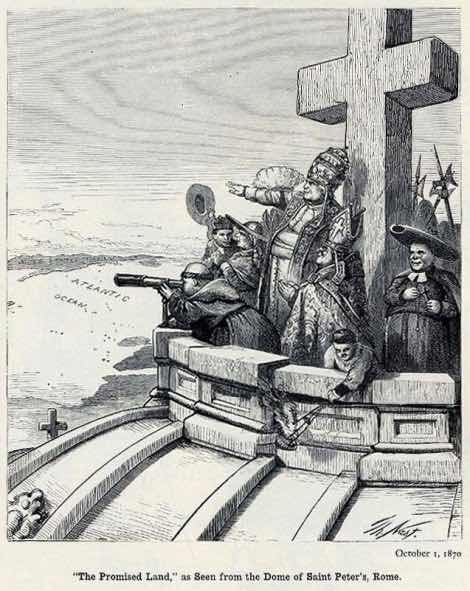 I’ve been encountering a lot more conspiracy theories—though not by choice—on social media lately. The tendency always seems to be based on observing the facts of a case and giving a dubious interpretation of those facts. Sure, there might be liars out there who feed false information to those who believe it, but many conspiracy theorists seem sincere in their beliefs and are shocked when you question their ideas. Because it’s “obvious” to them, they think it should be obvious to everyone.
Of course, we can all think of examples among certain groups of people. Anti-Francis Catholics immediately come to my mind. Others might immediately think of the COVID-19 deniers. But this goes way back. I don’t doubt that the people who believe Jack Chick tracts or The Protocols of the Elders of Zion are equally shocked by our disbelief, while thinking their bizarre ideas are true.Other falsehoods are given more widespread credibility. I’ve seen people allege Christian conspiracies against whatever sinful behavior is promoted by secular culture. In such cases, our objections to certain behaviors—especially by those who work at Catholic institutions and can cause public scandal—is often treated as a sort of conspiracy to discriminate. Our teaching on contraception and abortion becomes a “war on women.” Such accusations are just as dubious as other conspiracy theories, but they are repeated and believed by many, in much greater numbers than the wingnuts of society that alarm us.

In all of these cases, there are people who feel threatened by a certain Church teaching or government policy. They cannot perceive any reason for that action besides hostility to what they believe. This results in people believing that hostility or hatred must be the reason for the position. It’s true that we do need to beware of extremists and factional media who believe legitimate policies or teachings are malicious. But we also need to be aware how the mainstream media leads people to believe certain ways about people who support causes they disagree with.

We must use discernment about whatever we hear. Just because what we hear aligns with what we want to be true doesn’t make it so. Yes, our enemies can do evil, but so can our allies. And both our allies and enemies can cause harm with good intentions.

We cannot assume the worst of our enemies while being silent on the wrongs of our allies. Truth and charity are obligatory for Catholics. If we want others to speak truthfully and charitably about us (even if they’re sincere in believing their errors), we have an obligation to speak truthfully and charitably about others (even if we are sincere about believing our errors). That’s the Golden Rule (Matthew 7:12

), and it applies to us even if others do not respond in kind. God will judge those who bear false witness against us, and He will judge us if we bear false against others.

An earlier version of this piece, “Thoughts on Truth and Sincerely Believed Error,” appeared on David Wanat’s personal blog, If I Might Interject.

Keep the conversation going in our SmartCatholics Group! You can also find us on Facebook and Twitter.

Liked this post? Take a second to support Where Peter Is on Patreon!

David Wanat holds a Masters Degree in theology from Franciscan University of Steubenville. He has been blogging in defense of the Catholic Church since 2007. His personal blog is at http://www.ifimightinterject.com/.

Listen to your favorite posts!

Contempt for Pope Francis is a long-term problem 710 Shares

The UK Ordinariate and resistance to the Synod 327 Shares

Pope Francis on protecting the truth of the faith 150 Shares

With Gratitude and Joy 119 Shares

Get some WPI merch!

Support Where Peter Is!

Keep the conversation going in our SmartCatholics Group! You can also find us on Facebook and Twitter.